It’s hard to know what exactly to do with myself with all my extra time not on social media, but I’m trying to focus some of those energies into keeping photography rolling. Luckily, that hasn’t been too hard. For the first time in about a year, I find myself behind on editing and trying to motivate myself to get onto photoshop to catch up. I’m feeling much less amped to get on my computer and shop, but that will come to pass.

Shooting has been crazy though! On Saturday, I got to go on an adventure to Grand Beach with a group of photographers and models. I did the whole typical Jen thing where I barely shot all day – I was waiting for the right inspiration to come. I had picked up this gorgeous blue fabric from Valu Villiage a couple of days before, so I started there. I knew I was going to use that fabric somehow that day. I found myself later on in the day snapping pictures of a dead tree lying in the sand… until I ripped it out. It was this beautiful thing, looked almost like a peacock tail (except, you know, wooden and dead), and then my concept came together… I’ll say no more now, but look out for a photograph soon. I seriously wanted to drag that thing home, but I didn’t think the boyfriend would be impressed with me dragging a tree in the door.

Back in June, I had bought myself a large kiddie pool with the idea that I would shoot models in it. The first time I used it was entirely experimental, and definitely didn’t turn out how I had thought it would. First of all, take my advice – never fill up a pool inside your apartment (no, it didn’t leak, I promise). It took me hours to fill it, and I was so sore by the end of the day. The light wasn’t what I had hoped it would be, and so we had to work around that. I think, in the end, Kim and I got something really unique, even if it wasn’t what we were going for. 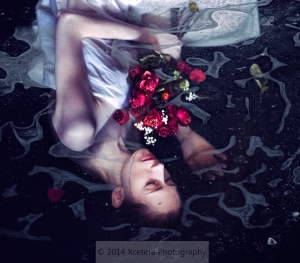 I decided to take another stab at this, using the pool, and luckily Christine Marie was up for the job. She was a total trooper, it was super cold that day, but she was still ready to go! We had the perfect light, and even though that one still didn’t go exactly according to play (what does?), we got an amazing result that I’m super happy with. 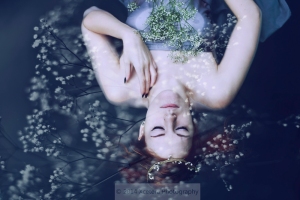 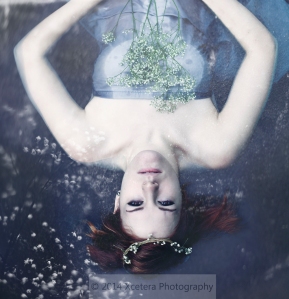 As for the rest of this week, I’ve got a lot to do! Tomorrow I’m going out with Amy Lovegrove and Ginaya Jesmer for another photography adventure into more sand dunes! I’m really looking forward to that (and hopefully meeting some new faces, not sure who else is coming). On Saturday, Jess Mann will be coming over and helping me experiment with a lighting technique for a shoot that I’ve been planning for months, one that I’m very, very excited for. Then, I have to finish a shoot I did on August 31st with the amazing body painter, Kim Brennan!